Have you ever felt like you’ve strayed from the path when it comes to your weight and health? A few extra pounds here and there, and the next thing you know, you are having difficulty keeping up with family and friends.

This is exactly what happened to Jason.

Eighteen months ago, Jason was the heaviest he’d ever been. He got married, had kids, and, as he put it “got fat;” during these major life experiences, he stopped taking care of himself. Once a talented high school athlete, Jason identified as a fit guy and considered leading a disciplined life as his “path.” 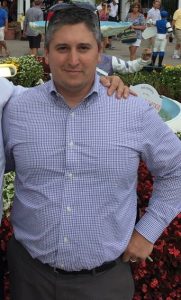 Then one day while playing with his kids, Jason realized he couldn’t keep up anymore. Out of breath, he had to stop playing even though his children were just getting started. Jason was now pushing 220 pounds and with his 40th birthday soon approaching, reality hit hard – he was off the path.

It was time for a change…

In his youth, Jason was no stranger to working out. He went to the gym and lifted weights regularly, however, being outside of organized sports as an adult caused a decline in motivation. Despite the fact that Jason had never run more than four miles in his life, he decided to try running in order to lose weight.

Like so many of us, Jason found an online training plan and marked his calendar. Jason even told his friends and family he was going to run a half marathon. There was no turning back now, between a tangible event he needed to get in shape for plus the added social pressure of announcing his marathon plans.

“My half marathon wasn’t fast. It wasn’t pretty, but I got it done,” he shared. With a long distance race under his belt, Jason celebrated his victory at his first half marathon.

Jason soon realized it was the moment spent in the starting corral of his first marathon that he caught “the bug.” Runners surrounded him, fireworks were going off, and people were singing the National Anthem. He felt incredible and considered the occasion a turning point in his life.

Similar experiences happen all the time for many runners; the exhilaration of both the start and finish line of any race are enough to convert event the sourest of runners.

It wasn’t long after this event that he set his sights on a full marathon. Training harder than ever, he ran the 2016 Chicago Marathon in 4:48. These achievements drove his passion for running into high gear and he was ready for more. 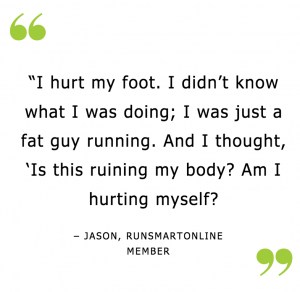 Though his weight was coming down and his confidence was growing, Jason was still running without any guidance. In an attempt to stay disciplined and on the “path,” he signed up for the 2017 Cincinnati Flying Pig Marathon.

Training hard, and excited to race his second marathon, Jason was exposed to the ugly side of running. Two weeks before the marathon, as he neared the end of his training cycle, disaster struck.

“I hurt my foot. I didn’t know what I was doing; I was just a fat guy running. And I thought, ‘Is this ruining my body? Am I hurting myself?’’ he questioned after injuring his left foot. In addition to the injury, Jason was left feeling devastated, a feeling many runners can identify with at one point or another.

On top of fearing he may never run again, other pressures were mounting. Jason was concerned he might lose his gains, return to his previous weight or get heavier than ever before.

In desperation, Jason turned to the Internet for answers and stumbled onto RunSmartOnline. Once on the site, he found a list of physical therapists and connected with Scott, a local PT who practiced near his home. Upon meeting, Jason was bandaged up and Scott helped him fix his form in order to complete the tough marathon in Cincinnati.

His injuries slowed down his time and influenced the manner in which he ran, but Jason still crossed the finish line. Though running with an injured foot tested his mental strength, he persevered and learned a valuable lesson as he completed his second 26.2 miles – running smart was more important than running a lot. 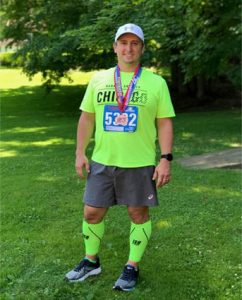 The original training Jason received online when he downloaded his first training plan was perhaps good enough to help him finish his initial race, but it wasn’t good enough to keep him on the road for the rest of his life.

At the direction of his physical therapist, Jason went on to begin training with RunSmartOnline’s new training plan tool. He customized his training plan using his newest goal of returning to Chicago in 2017 as his foundation.

Jason went on to complete the Chicago Marathon for a second year in a row and recorded a personal best of 4:18, a full 30 minutes faster than the previous year!

The success in Chicago has added to Jason’s fire.

“Now I feel like a million bucks! I still have some work to do, but I feel as I shed the fat and keep running smart, I am going to continue hitting PRs,” he added.

Jason’s running goals are realistic and his optimism is grounded in results. He wants to continue losing more weight and slowly decrease his running times. With his exemplary discipline, a supportive wife, and help from RunSmart, it is safe to say that Jason’s running future is bright.

He is finally back on the path…

Are you ready to step back onto your path? Whether you are a new runner or have been out of the game for many years, RunSmartOnline’s training plan tool can help you map out your goals and achieve success. Learn more here.

8 Pet Peeves That Annoy Your Fellow Runners on Rac... Maybe it’s the endorphins, but in general, runners are typically a pretty friendly bunch. They’ll give you advice on gear and routes for days, e...
Runners: 7 Ways to Carry Your Phone Without Strapp... You want to run with your music, have the ability to call someone should you need help, or consult with a map if you happen to get lost. So, running w...
The Runners Guide to the 2018 Boston Marathon With the Boston Marathon just days away, many people are excited to see what this year's race will bring. This is one of the largest marathons i... 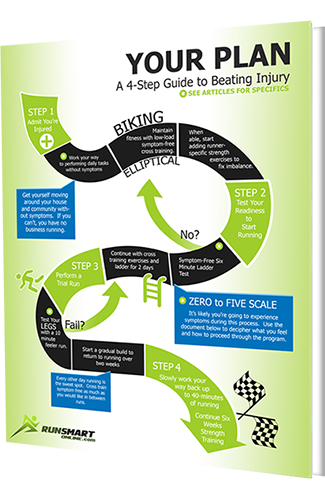