Chicago was a first for me. Not only was it my first time running through the 29 neighborhoods, but also for another reason….

Since I started running nearly 10 years ago, I always had an ultra-competitive mentality. I loved competing against myself and the clock. Every year I would work to run faster and train harder.

As a young, happily married, and kid-less professional it was easy to find the time and energy to put in the hard workouts and high mileage, all while being uber focused on recovery. Naïve Steve thought it might always be this way…

For the last couple years, my professional and running goals fought for my attention. I loved the challenge of excelling at both. Then… the trifecta. My son William was born in 2015 and it was clear that the game was about to change.

Initially, I leaned into the challenge. In 2015 I clawed my way to a 2:51 PR at Grandma’s Marathon — only six months after William joined my wife and I. Despite being excited about a massive PR, it was clear that my current path was not sustainable. I was burning out.

I fought my burn out with all that macho stuff… you know, the “stop being weak! Push through – it’s not supposed to be easy.” While it resulted in a respectful time the following year at the 2016 Boston Marathon, I was emotionally and physically spent.

It took some time for me to heal mentally and physically. For a few months I focused on resetting my running back to the days I fell in love with it. Running for me.

Eventually, enough time passed for me to give the 2017 Chicago Marathon a go — only this training cycle was going to be different.

Unlike previous races, I attempted to ease the pressure on myself and loosened the reins on my “PR at all costs mentality.”

If at any point (and there were multiple instances) where I was dreading a run, I would pull back, run easy, or altogether skip my run. Let me tell you, there were plenty of times where I was too tired to run hard. I just wanted to run for me, for stress relief and to clear my head. So I did.

And with that, came a training plan that was about training with enjoyment, more self-awareness.

Ultimately, my plan was pretty simple for race day. I was going to go out at a pace that I thought was sustainable, be mindful of the run itself, and see, albeit nervously, what would happen….

1. It only took me 20 seconds to cross the starting mat (it took some tens of minutes)

2. I would not be subjected to a higher degree of temperature rise that was predicted for the day

As my training partner, Rob, and I walked to our corral, we were greeted by a sea of crazies who literally turned the coral into a circular whirlpool of human bodies. You either joined them in pint-size track warm up, or risk being trampled (one guy was actually doing striders lol).

Before I knew it, we were off. Runners surging past, some tripping on others as they jockeyed for a position (you know because there’s not a time for that later). Regardless, it took me a few miles to settle into a groove. Knowing from a shakeout run the day prior, I wasn’t going to be able to rely on my Garmin for accurate pacing – it was all on feel for these first five.

Aside from the disappointment of missing my wife and son, the early portion of the run was quite fun. Large crowds greeted us while some of the more outgoing runners waved their arms to pump up the crowd. By mile three I found myself right on pace…

The middle miles…. “I can’t believe how good I feel!”

The next 10 miles were all about settling in, taking in the sites, and having fun. This was truly the first marathon I’ve run where I took in my surroundings. Normally, I’m so focused on the task I miss the entire race! Unquestionably, these middle miles were the highlight of my race. More than once I was self-aware of how easy it all felt and how happy I was to be running.

From crazy neighborhood celebrations to dogs barking at us as if to cheer us on, these 10 miles went quick. A quick side note, if you have never run Chicago, they have MASSIVE aide stations. I’m talking two city blocks long. With it came hundreds of volunteer and spectator cheerleaders with energy that carried easily carried me from one to the next.

Initially, my plan was to run even miles until 16, then, if I felt good, pick up the pace. Feeling great, I decided to make a move at mile 15, testing my legs as I increased my speed. I cruised through mile 16 still thinking that it was all too easy while trying to convince myself to not “jinx” myself.

Working through a right turn, I felt a squeeze in my left calf. Being down this road before (pun intended), I pulled up a little to let my calf relax.

Crossing mile 17 at 6:46/mile, and feeling relatively good with my cardio, I began working my way back down.

Working mile 17 through 20, I made repeated attempts to execute my plan to finish strong. Each attempt was met with a tightening in my left calf with foreshadowing of a long, lonely walk to the finish.

As the tightening slowly progressed with steps, I went through a list of corrections to try to salvage my plan to finish strong: increased fluid, grab an extra on-course gel, and even (gasp) changing to a heel strike.

It was becoming increasingly apparent that I had two options:

1. Run through it and hope I hold up – risking a cramp that would yield a lonely walk in
2. Back off and cruise myself to the finish and reduce my risk for having to walk

The back and forth went on for a mile or so; ultimately, the deciding factor was that the second choice gave me the best shot at breaking 3 hours.

I pulled back considerably, and while I was still passing runners who seemed to opt for the road I didn’t travel, countless others roared past me towards the finish.

It was a weird feeling making my way back to Grant Park and the finish line. Fitness and breathing wise, I felt great. My legs had gas in the tank, but the left calf was dictating my plan. I resorted to a sort of self-awareness that I never experienced in a race.

You see, normally, I barrel from start to finish with blinders on. I look straight ahead and burn the candle to the bottom. My calf gave me a race experience I never had. I noticed the buildings. I noticed what a beautiful day it was and how crazy awesome the spectators were.

When I hit my stopwatch to signal my finish, Chicago was marked as one of my worst times in recent years, but strangely, it was the best race I ever had.

Chicago was the first time I enjoyed my final miles (don’t worry it still hurt a bit). Previously, I was convinced I couldn’t run another step. I was just done.

I finished and, weirdly, enjoyed myself (as much as one can for running 26.2 miles). And while I wish the back end of the race could have gone more according to plan, I’m shockingly ok with it.

The 2017 Chicago Marathon, my shift in training, and my calf, all helped me take a step in being a more self-aware person – something I struggle with daily. I couldn’t be happier with my time and experience in Chicago and it may be something that we all need to think about once in a while…

We all started running for a reason — and that reason is rarely to compete. Most of us ran for ourselves and enjoyment above all else. Heading back to this mindset can be healing and bring back the passion for putting one foot in front of the other.

Grandma’s Marathon: 2015 Race Report "There are no limits on what can be achieved when we remove the mental barriers we set for our self.”-Mark Devine This echoed throughout my head th...
Marathon Race Report My pre-race was anything but ordinary.  I spent 18 weeks fully documenting and planning my approach to running my first sub 3 hour marathon.  As the f...
2013 NYC Marathon Race Report Let me open with: Every runner, triathlete, and coach potato needs to put this race on their bucket list. No race has rivaled the experience of NYC ...
Share97
Tweet
Pin1
Share
Shares 98 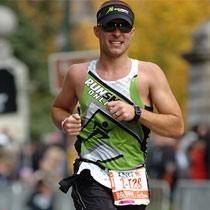