One of the most common run flaws amongst sub-elite runners is the tendency to toe out when they run. It’s often accompanied with other activities, too (standing and walking). For most, toed out gait is completely subconscious. Your friends may joke about your duck feet, but can you help it? The answer lies in the much hated answer: it depends. The result of toeing can be a required anatomical compensation, one acquired through adaptive compensation, or one of simply sloppy movement. Duckers can do it unilaterally, on one side, or bilaterally, both sides.

A toed out gait isn’t ideal. Although it might be required for some (due to their anatomical hip position), a large percentage of the duck foot population, who will be termed duckers for the remainder of this article, can fix their sloppy movement and even reduce their risk for injury while improving their speed.

Injury from Being a Ducker

Our body is designed around simple structural support system that works to distribute force around joints and not through them. Sure, our body spins around ours joints, mainly to absorb shock, but duckers compromise their structural support. A toed out gait allows your foot to drive through your midfoot and not over the ankle. Ultimately, the result is excessive pronation and increased strain to the foot and knee. Duckers will be more susceptible to medial tibial stress syndrome (MTSS or shin splint), plantar fasciitis, or medial knee pain, as these areas receive increased tensile force through the front half of gait.

Running Slower as a Ducker

Adding insult to injury (sometimes literally), duckers will likely set themselves up for a loss of power at push off. Toeing out at the point of impact will drive you into excessive pronation, which, depending on strength, will affect your ability to find the ‘sweet spot’ at push off. Ideally, you’re foot re-supinates in preparation for push off. Supination is synonymous to rigidity. A rigid lever at push off allows the muscular force to transmit through the foot and into the ground. If you can’t achieve supination at push off your force will leak through movement at your rear, mid, and forefoot. Think of pushing off in loose sand. At a time when you’re looking for stability to drive into the ground, movement and slipage in the sand will minimize the amount of force transmitted into the ground–same idea.

The entire system becomes rigid at push off (or should). The hip extends into a closed pack, locked position. The ligaments of your hip turn your hip into a rigid lever and allow it transmit forced down the chain. The knee straightens and locks into extension. Again, transmitting force down the chain. A toed out gait? Holy energy leakage. A fair amount of force will be lost through a flexible foot.

How to Fix Being a Ducker

As previously stated, some runners become duckers with running, walking, and standing due to anatomical compensation. Some runners are born with retroverted hips. Simply put, either the femur (thigh bone) or acetabula (pelvis) are rotated backwards. This rotation causes malalignment at the pelvis. To maximize surface area at the hip joint a ducker will outwardly rotate their hip and in turn, the entire leg. The outward rotation of the leg, and thus the toed out gait, occurs for an anatomical reason. For these runners it’s about supporting the foot and maximizing strength. Simply turning the foot inwards is not advised.

This next problem arises from either tightness or fetal development. The tibia, or shin bone, can excessively rotate inward or, in the case, outward and pull the foot with it. Dertermining if tibia torsion (rotation) is the cause of your toeing out should be conducted by a physical therapist or orthopedic doc. A PT can determine if your shin is simply overly rotated or if the bone is actually twisted. One of which (twisting of the bone) cannot be corrected through exercise. To test for tibia torsion: Sit tall at the edge of your bed, feet dangling. Without allowing your hips to roll outward, relax your lower leg. The midline of your foot should face straight ahead or with a slight outward rotation. Below we see individual with right tibial torsion. 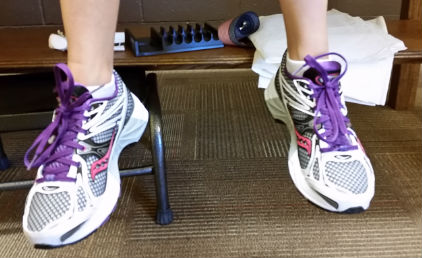 Our bodies always follow the path of least resistance and open the door for compensation. As our hips extend, the supporting ligaments draw taut and our hip flexor elongates. Doing so stabilizes the femoral head in your hip socket and loads the hip flexor respectively. Unfortunately, if our ligaments and hip flexors are on a short leash they will become taut early and attempt to release tension. How does you hip achieve this? Through external or outward rotation. The foot will most notably toe out at push off, through swing phase, and maintain outward rotation into initial contact. The same concept can be said for your external rotators. Tightness in the back of the hip can cause the thigh bone (and entire leg) to toe out as you swing through to initial contact.

You would think your body would provide proper movement for an activity, but it doesn’t. Our body is concerned about task completion–not efficiency. You need to train efficiency. We see this all the time as patients adopt compensations for getting in and out of chairs, using their momentum or arms to get up while plopping from gravity on the descent. New runners or those who lack overall strength are more likely to deviate from ‘ideal’ foot placement for varying reasons. The sloppy movement usually results in flailing limbs and toeing out at impact. Improving overall strength, particularly between the rib cage and the hips, and focusing on proper foot placement will rewire the nervous system for proper foot placement.

It’s important to determine if you’re a ducker from both a speed and injury standpoint. A physical therapist can quickly determine if your hips are retroverted and if not, how to fix associated tightness or muscle weakness that’s making you a ducker. This is usually more than just simply turning your foot to face straight ahead. Always learn the why before blindly changing your movement… your movement is usually dictated by the tools in the toolbox!

Adjust Expectations for Warmer Temps Too often we are focused on nailing our paces, even if it means burning our ships (legs). Hot, warm, and humid days are here to stay. It's that a...
Fixing Bad Running Habits Fixing Bad Running Habits can be Done! Turn Off Your Autopilot! Our lives run on habits (pun intended). They are wired and built from birth. Ever no...
Running Form of Professional Triathletes Running Form is by far the best way to get faster while decreasing the risk for injury Above is a brief RunSmart Running Analysis of some of the best...